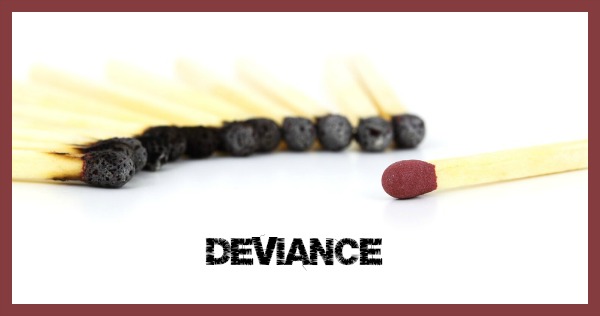 Writing in the Sociology of Deviant Behavior, Marshall Clinard and Robert Meier note that while people are generally confident in their understanding of what constitutes deviance, the fact is that 'no consensus reliably identifies behavior, people, or conditions that are deviant,' particularly in relation to emotive issues such as drug use, homosexuality etc.

Deviance does not exist in a vacuum, it shifts in response to historical, cultural, political and societal expectations. As a result, work on the nature of deviance takes many forms. Although common areas of interest do exist. Namely:

"The deviant is one to whom the label has successfully been applied: deviant behavior is behavior that people so label." (Howard S. Becker)

Topics typically explored within the academic study of deviance include:

It is the Deviants Among us Who Hold Society Together

Insightful Animation about social deviance and social control from Dalton Conley's book, You May Ask Yourself: An Introduction to Thinking Like a Sociologist.


Go From Deviance Back To The Home Page