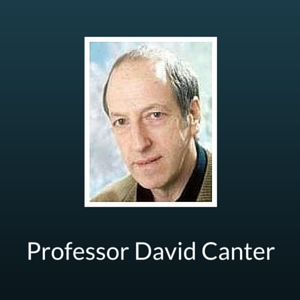 The aim of this page is to showcase the work of Professor David Canter. In doing so readers will be introduced to the concept of investigative psychology.

David Canter is a Professor of Psychology and Director of the International Research Centre for Investigative Psychology at University of Huddersfield (UK).

He is a Fellow of the British Psychological Society, a member of its Forensic Division, a Chartered Forensic Psychologist and the President of the International Academy of Investigative Psychology. In addition, he is a Fellow of the American Psychological Association and a Member of the Forensic Science Society. He has published 20 books and over 150 papers in learned professional journals, and lectured around the world on various aspects of scientific psychology.

Professor David Canter has given evidence to a number of major government enquiries and to a House of Commons select committee, including unchallenged evidence to the enquiry into the Kings Cross underground fire concerning whether the fire was accidental or malicious. He has given evidence to the Appeal Courts in Belfast and in a murder trial at the Old Bailey. He has also given advice in response to requests from over 150 police investigations world wide.

Professor Canter's main area of expertise is the systematic analysis of dominant trends within human behaviour; resulting in a number of studies concerning the inferences about the probable characteristics of an offender that may validly be derived from the consideration of the ways in which a perpetrator commits a crime.


Investigative psychology is a systematic methodology that developed out of offender profiling contributions by psychologists and the FBI. In recent years this influential sub-discipline has become an increasingly dominant area within the study and practice of forensic psychology.

Professor David Canter coined the term Investigative Psychology in the early 1990's to draw attention to the the fact that there were many ways in which psychology could contribute to criminal investigations and as such, a new field of applied psychology was emerging. This field posed many challenges to conventional research methodology and demanded a special approach which was able to cope with the muddiness and patchiness of its central data.

Early studies within Investigative Psychology tended to focus on what the offender did, however, it became increasingly apparent that what the polide did in the course of an investiation was also of great academic and practical interest. As a result, Investigative Psychology now explores the significance of decision making, problem solving and interviewing alongside the psychological significance of how offenders operate. 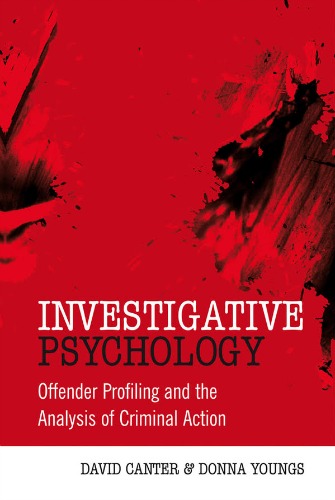 This ground-breaking text is the first to provide a detailed overview of Investigative Psychology, from the earliest work through to recent studies, including descriptions of previously unpublished internal reports. Crucially it provides a framework for students to explore this exciting terrain, combining Narrative Theory and an Action Systems framework. It includes empirically tested models for Offender Profiling and guidance for investigations, as well as an agenda for research in Investigative Psychology.

In effect, this text introduces an exciting new paradigm for a wide range of psychological contributions to all forms of investigation within and outside of law enforcement. Each chapter has actual cases and quotations from offenders and ends with questions for discussion and research, making this a valuable text for undergraduate and postgraduate courses in Applied and Forensic Psychology, Criminology, Socio-Legal Studies and related disciplines.

Investigative Psychology: Offender Profiling and the Analysis of Criminal Action