Psychopaths versus Sociopaths: What is the difference? 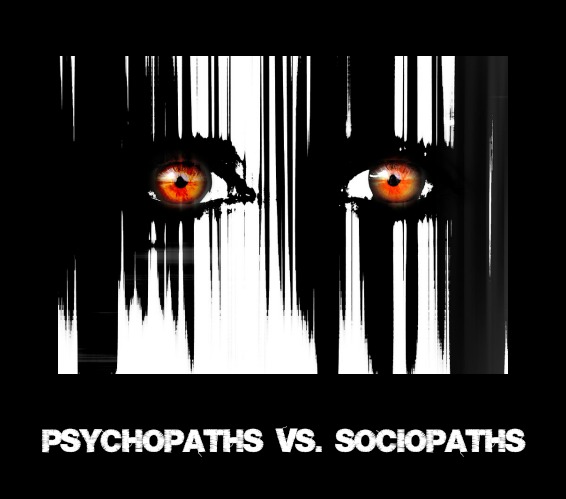 Psychopath and sociopath are popular psychology terms to describe violent monsters born of our worst nightmares. Think Hannibal Lecter in Silence of the Lambs (1991), Norman Bates in Psycho (1960) and Annie Wilkes in Misery (1990). In making these characters famous, popular culture has also burned the words used to describe them into our collective consciousness.

Most of us, fortunately, will never meet a Hannibal Lecter, but psychopaths and sociopaths certainly do exist. And they hide among us. Sometimes as the most successful people in society because they’re often ruthless, callous and superficially charming, while having little or no regard for the feelings or needs of others.

These are known as “successful” psychopaths, as they have a tendency to perform premeditated crimes with calculated risk. Or they may manipulate someone else into breaking the law, while keeping themselves safely at a distance. They’re master manipulators of other peoples’ feelings, but are unable to experience emotions themselves.

Sound like someone you know? Well, heads up. You do know one; at least one. Prevalence rates come in somewhere between 0.2% and 3.3% of the population.

If you’re worried about yourself, you can take a quiz to find out, but before you click on that link let me save you some time: you’re not a psychopath or sociopath. If you were, you probably wouldn’t be interested in taking that personality test.

You just wouldn’t be that self-aware or concerned about your character flaws. That’s why both psychopathy and sociopathy are known as anti-social personality disorders, which are long-term mental health conditions.


Psychopaths and sociopaths share a number of characteristics, including a lack of remorse or empathy for others, a lack of guilt or ability to take responsibility for their actions, a disregard for laws or social conventions, and an inclination to violence. A core feature of both is a deceitful and manipulative nature. But how can we tell them apart?

Sociopaths are normally less emotionally stable and highly impulsive – their behaviour tends to be more erratic than psychopaths. When committing crimes – either violent or non-violent – sociopaths will act more on compulsion. And they will lack patience, giving in much more easily to impulsiveness and lacking detailed planning.

Psychopaths, on the other hand, will plan their crimes down to the smallest detail, taking calculated risks to avoid detection. The smart ones will leave few clues that may lead to being caught. Psychopaths don’t get carried away in the moment and make fewer mistakes as a result.

Both act on a continuum of behaviours, and many psychologists still debate whether the two should be differentiated at all. But for those who do differentiate between the two, one thing is largely agreed upon: psychiatrists use the term psychopathy to illustrate that the cause of the anti-social personality disorder is hereditary. Sociopathy describes behaviours that are the result of a brain injury, or abuse and/or neglect in childhood.

Psychopaths are born and sociopaths are made. In essence, their difference reflects the nature versus nurture debate.

But America’s Federal Bureau of Investigation (FBI) has noted certain traits shared between known serial killers and these anti-social personality disorders. These include predatory behaviour (for instance, Ivan Milat, who hunted and murdered his seven victims); sensation-seeking (think hedonistic killers who murder for excitement or arousal, such as 21-year-old Thomas Hemming who, in 2014, murdered two people just to know what it felt like to kill); lack of remorse; impulsivity; and the need for control or power over others (such as Dennis Rader, an American serial killer who murdered ten people between 1974 and 1991, and became known as the “BTK (bind, torture, kill) killer”).


The Sydney murder of Morgan Huxley by 22-year-old Jack Kelsall, who arguably shows all the hallmarks of a psychopath, highlights the differences between psychopaths and sociopaths.

In 2013, Kelsall followed Huxley home where he indecently assaulted the 31-year-old before stabbing him 28 times. Kelsall showed no remorse for his crime, which was extremely violent and pre-meditated.

There’s no doubt in my mind he’s psychopathic rather than sociopathic because although the murder was frenzied, Kelsall showed patience and planning. He had followed potential victims before and had shared fantasies he had about murdering a stranger with a knife with his psychiatrist a year before he killed Huxley, allegedly for “the thrill of it”.

Whatever Kelsall’s motive, regardless of whether his dysfunction was born or made, the case stands as an example of the worst possible outcome of an anti-social personality disorder: senseless violence perpetrated against a random victim for self-gratification. Throughout his trial and sentencing, Kelsall showed no sign of remorse, no guilt, and gave no apology.

A textbook psychopath, he would, I believe, have gone on to kill again. In my opinion – and that of the police who arrested him – Kelsall was a serial killer in the making.

In the end, does the distinction between a psychopath and sociopath matter? They can both be dangerous and even deadly, the worst wreaking havoc with people’s lives. Or they can spend their life among people who are none the wiser for it.